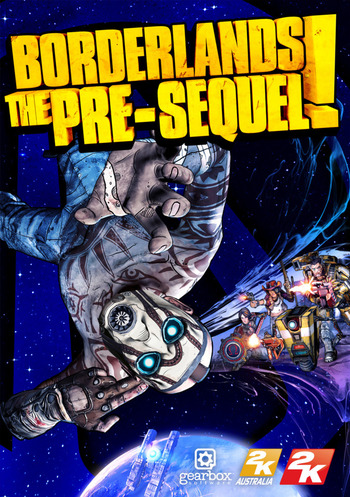 Take a ride on the Black Dragon...
Borderlands is back. Bazillion just got, wait, we got this. Bazilliondiestier? Bazilliondorst? Godzilliondier? Screw it.
Advertisement:

Borderlands: The Pre-Sequel! is the third Space Western/FPS/Action RPG game in the Borderlands series, released on Xbox 360, Playstation 3, PC, Mac, and Linux. Set as an Interquel between Borderlands 1 and Borderlands 2, the game opens with future villain Handsome Jack desperate to escape and reclaim the Hyperion moon-base he was banished to. Hiring a Ragtag Bunch of Misfits to act as his henchmen, the player characters this time include two villains and two NPCs who appeared in previous instalments: