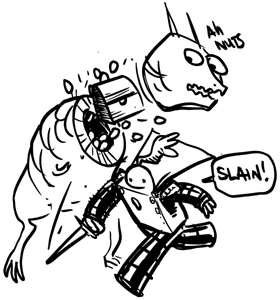 .
Used with permission.
Narrator: The Bard, having slain the random wolf, found that it had digested not only the contents of a small treasury, but also various household goods... Wait, am I reading that correctly? That can't be right.
The Bard: You'd be surprised. I find all kind of things inside these beasties. Did I ever tell you about the time I killed this rat, and out popped an entire chest?
— The Bard's Tale, [1]

In the Real World, animals don't use money. Not so in video- and role-playing games. For many game economies, wealth is associated with dangerous creatures; if you can attack it and it is alive (in some sense) and/or able to theoretically attack in return, it probably has some actual currency which will become available upon its death. This will be true almost without regard for the creature's ability to carry money, its interest in money, whether it's sentient enough to comprehend money, or any connection with the existence of the money. On occasion, this is true regardless of whether it had money the first time.

Occasionally, there will be an in-game Hand Wave saying that there's a bounty on the monsters you're fighting. However, unless there's a specific sub-quest requiring you to, say, slay twenty bears and bring back their asses, you will never be required to talk to a specific person or prove that you've killed the monsters in order to get the money. Shop Fodder is sometimes used as a more realistic version — killing the monsters doesn't get you immediate money, but you can easily sell their teeth, hides, or feathers back in town. However, this eats up precious seconds of a player's time, in which time you might get bored and switch to another game. And we can't have that, now can we?

While having a danger-based currency is rather plausible (for certain values of plausible) — after all, currency stands for commodities (goods or services) or labor, and killing a dangerous creature is not only a useful service, especially in a monster-filled world, but can indeed be quite a bit of labor — this has largely become a Discredited Trope, to the point that reviewers occasionally bash game developers for making monsters drop money.

Parodied in a great number of video-game-based webcomics and other satire. For a specific enemy that you seek out because it carries a lot of money (or other reward), see Piñata Enemy, with tougher variants being Metal Slimes.

Named for the spiders in the family Linyphiidae, called "money spiders" in the UK from the superstition that they are associated with wealth. Ironically in light of the trope, these spiders are supposed to be left unharmed in order to become richer.