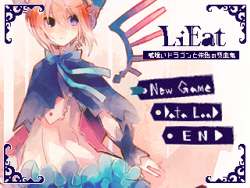 LiEat is a series of three short RPGs made by Miwashiba on Wolf RPG Editor, released in 2014. It follows a young dragon who can eat lies, named Efina, and her adventures as she accompanies her "dad", a con artist named Leo.

. You can now buy the entire trilogy as a single package on Steam

. An English translation has been provided by vgperson, which can be found here