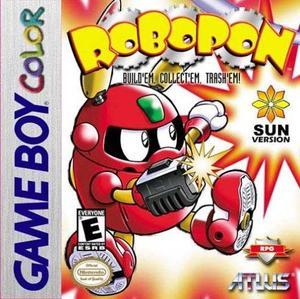 Robopon (short for Robot Ponkottsu in Japanese) is a series of RPGs produced by Hudson Soft and Red Entertainment and brought to the U.S. by Atlus. Three games in total have been released; three distinct versions for the first, Sun, Star, and Moon (released on the GBC in 1998 to 1999), while the second had Ring and Cross (released on the GBA in 2001). There was one other single-version game, Robopon 64, for the N64. The franchise also received a manga adaptation in Comic Bon Bon, which also got a tie-in version of Moon.

The handheld games chronicle the adventures of a young boy named Cody, and his quest to become a Robopon master. Robopon, as the name implies, are robots, created by catching them in the wild with magnets, growing them from seeds, or "sparking" two batteries together; practically everyone has one, and uses them to participate in fighting competitions.

Sun, Star, and Moon follow Cody's quest to become Legend1 in the Robopon rankings of Porombo Island, while Ring and Cross detail his journeys in the country of Majiko and the tournament there. 64 follows expies of Cody and his rival Bisco who sail water-filled worlds in search of treasure and Robopon while contending with pirates.

Gameplay in the first game was similar to Pokémon, but with a robot theme—some status effects, for example, were Fog, Rust, and Crash. You had 4 Robopon in a party and sent them out one by one, using Software to attack and Parts as equipment. Combining software could get you more advanced, powerful moves. Obtaining Robopon was done by catching wild 'Pons with magnets, and evolution was an option if you collected enough Energyballs after battles.

In the second game, gameplay was streamlined and less obviously Pokemon-inspired. Your party was out all at once, Robopon had oil types that affected who they could multiheal or multiattack in battle, evolution was an option via leveling, and Robopon were no longer caught—you sparked them by combining two batteries. An overall faster game made for a better-received experience, though both games are well-regarded by fans.