Visual Novel / Our World Is Ended 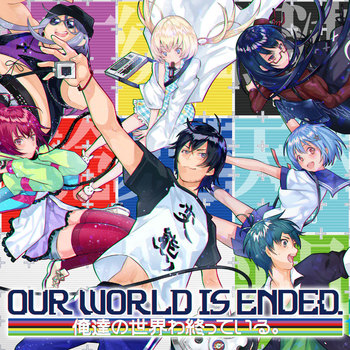 Our World Is Ended is a 2017 Visual Novel by RED Entertainment.

Deep within the heart of Tokyo's Asakusa district lies the sole office of Judgement 7, a small indie game developer known in niche circles for rushing out poor quality games and obnoxious social media presence. College student Reiji Gozen is a new recruit, though he spends more time running errands for his corporate overlords than anything to do with game development. After an intense month-long crunch period, which resulted in another flop, Reiji is roped into beta testing a new Augmented Reality game engine, armed with an unwieldy headset. A mysterious glitch in the engine ends up augmenting his reality in some unexpected ways. He can no longer leave Asakusa; trying to cross its borders will spawn him on the other side of town. The entire population, save for the members of Judgement 7 and a bunch of random monsters roaming around, also seems to have vanished.

Judgement 7's back catalog of games soon begins bleeding into the real world, leaving the team with many mysteries to solve.

The game was first released on Play Station Vita, only in Japan. It was later ported to PlayStation 4 and Nintendo Switch in 2019, alongside a Western release. An expanded port under the new title JUDGEMENT 7 would also be released, but remains Japanese-only.

Our World is Ended provides examples of: