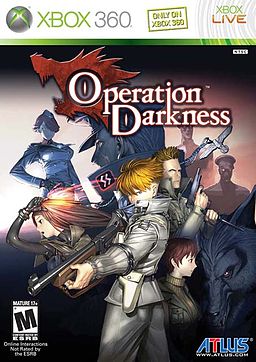 A mix of WWII and Fantasy/Sci-Fi. Doesn't that sound awesome or does it sound awesome?
"The gist is that after the introduction of a clear and dominant evil, and to continue on to show the absence of the clear villain and the chaos that flows after it, it was necessary to place Hitler in Operation Darkness as a symbol of the true evil."
- Ken Ogura (main producer of Operation Darkness when he was asked in an interview why Adolf Hitler was placed in the game as a major antagonist)
Advertisement:

Operation Darkness is a turn-based tactical RPG developed for the Xbox 360 by Japanese studio Success and released in late 2007 in Japan and most of Southeast/East Asia. It was licensed to Atlus for its North American release in mid-2008. The game was released once again in 2010 in Xbox Live, which also included a Europe-wide release in the same year.

A fairly standard take on the tried-and-true mashup of World War II and the occult, the game follows a squad of SAS soldiers - the Wolf Pack (Officially known to the Allied Military forces as K Company, 1st Platoon) - fighting the Nazis across the European Theater and eventually attempting to assassinate Adolf Hitler himself to win the war for the Allied cause. The so-called Wolf Pack's membership includes Edward and Jude, a pair of infantry soldiers reassigned after their last mission resulted in the death of their platoon; Cordelia, a firestarter; James Gallant, the leader (and a werewolf); Keith, the point man; Frank, a close-combat specialist; Cynthia, a top-heavy Irish sniper; Herbert East, a medic and the only character who can revive dead soldiers; and, um...Jack the Ripper. A descendant of Van Helsing joins in the fight as well as a reanimated dead German soldier in a Jin-Roh-like battle armor suit. Together, they take on the German military and its allies, the Blood Clan led by a vampire officer named Alexander Vlado and his right hand woman Carmilla in order to prevent the entire world from being placed into total chaos.

Generally very poorly received by critics, the game has nonetheless found its cult following worldwide, most of whom will admit that it has more than its share of flaws (The nearly complete lack of any kind of tutorial, there's very little explanation of the effective use of cover mechanics, the abounding Narm) (that the entire main cast is voiced by popular professional VA's helps too) but remains enjoyable nonetheless as a result of its handful of unique gameplay mechanics and its straight-faced treatment of its decidedly ridiculous and somewhat Troperiffic subject matter.