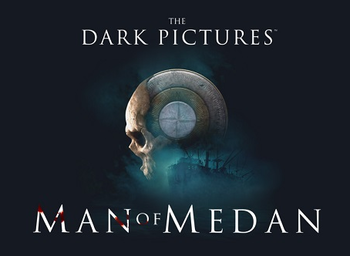 You think you can scavenge down there and it makes no difference, but every single thing you bring back has an essence. It's like a ghost you invite to the surface.
—Fliss
The Dark Pictures: Man of Medan, also known simply as Man of Medan, is an Adventure Game slash Survival Horror developed by Supermassive Games and published by Bandai Namco Entertainment. It is the first game in The Dark Pictures Anthology, a series of horror games that share a framing device but which are otherwise standalone. It was released on August 30th, 2019 for PC, Xbox One, and Playstation 4.
Advertisement:

that crashed just after the end of World War II's War in Asia and the Pacific. While successful in locating the wrecked plane at the bottom of the seabed, they soon end up dealing with supernatural forces onboard a Ghost Ship dating from the same time period. In addition, the group comes under threat from Ruthless Modern Pirates along the way.

The game is followed by Little Hope, which was released worldwide October 30, 2020.