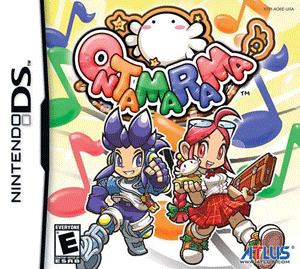 A rhythm game by Atlus for the Nintendo DS, OnTaMaRaMa has players press the D-pad to the beat of the songs with directional arrows appearing on-screen, like playing DDR with a controller. However, what makes this game different is that you need to tap multi-colored creatures known as Ontama on the touch screen before you can press the corresponding buttons, or else it qualifies as a "Miss". This forces players to not only pay attention to the music, but also the Ontama that need to be removed. Surprisingly for the genre, this game actually features a Story Mode in which one of two protagonists have to stop a demon from absorbing all of the energy from all the Ontama on their island.