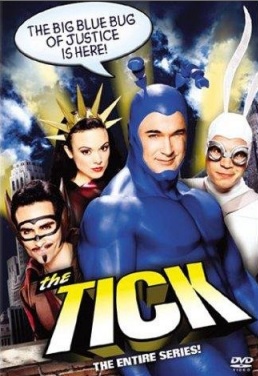 The life of a superhero is a lonely one, filled with hardship and danger. The few who answer the call must leave comfort, safety, and often sanity behind. But someone's gotta stand the heat and stay in the kitchen. Someone's gotta don the oven mitts of all that's right and strangle the red-hot throat of all that's wrong. This is that someone's story.
— The Tick
Advertisement:

A 2001 live action version of surreal cartoon superhero The Tick.

Fed up of having a big blue spandex-clad lunatic weirding out his customers, a bus centre manager ships The Tick to The City. Meanwhile, mild-mannered accountant Arthur gets fired from his job for showing up to work in a winged bunny suit (OK, moth suit) and deciding he wants to fight crime. They team up with Captain Liberty and Batmanuel,note substitute characters for American Maid and Die Fledermaus, who were absent due to licensing and rights issues and get into all manner of high action battles with evildoers...

... which all occur offscreen due to budget trouble. Most of the shows deal with their downtime, being described as "Seinfeld in tights". Much of the animated show's style and wit was retained, along with different humor and comedic deconstrunctions. It was canceled before it could run a whole season. (It probably didn't help anything that the last Episode, The Terror was scheduled to run on 9/11/2001.)

A reboot would eventually be produced by Amazon Prime, and while The Tick (2016) does not share continuity with this series Patrick Warburton was involved as a producer and Liz Vassey (who played Captain Liberty) would provide the voice of a character in the second season.