No Guy Wants an Amazon 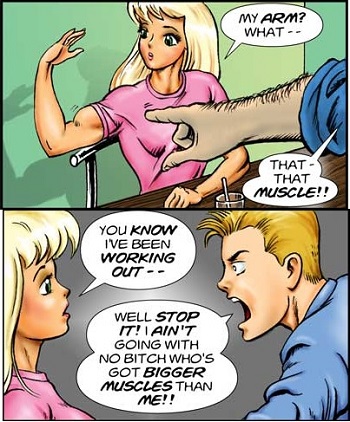 Keep up the attitude, sport; maybe your right arm will match hers someday.
"I'm weirding guys out. They see me on TV, round-housing some goon out a window. It's a vivid image."
— Kim Possible
Advertisement:

It's not easy for women on TV today to be both beautiful and strong, like the Amazons of Greek mythology. Why? Because All Guys Want Cheerleaders, but no guy wants a girl who can beat him up. If you must be a Magical Girlfriend, he would prefer the domestic type. A Huge Schoolgirl or Cute Bruiser all grown up is a threat to his tough, masculine image. In Layman's Terms, he's not an Understanding Boyfriend (yet).

Strangely, as far as this trope is concerned her actual inclination and ability to (sexually) assault, maim, cripple, or kill him aren't as important as whether she looks capable of doing so.

So you frequently find a protagonist who is instantly attracted to a hot girl only to discover too late that she's a black-belt, a professional athlete, or a superhero, and he suddenly needs to find a way to prove he's as tough and strong as she.

Unlike All Guys Want Cheerleaders, this trope doesn't necessarily tap into what the entertainment industry presumes turns guys in the audience on or off — that's more a part of Chickification. The proverbial Amazon is usually portrayed in a positive light and the guy as the fool. The most common way to end the plot was traditionally with An Aesop about equality. Today, the girl is just as likely to be the protagonist, and the ending is likely to be a Slap-Slap-Kiss. However, in older (1950 to 1990ish) media the trope is usually played straight and without irony, because writers assumed that young male viewers would see a naturally strong woman as an insult to the hero's (and by transference their own) masculinity.

A leading cause of The Chick meaning 'girly' or non-combatant. Contrast Amazon Chaser, where guys go for a woman because she kicks ass. Also contrast with Masculine Girl, Feminine Boy, where the man in question is meant to be weaker and girlier than his female counterpart, and the various tropes on Acceptable Feminine Goals and Traits. All Amazons Want Hercules may also be considered an inversion since it runs on the logic that No Amazon Wants a Normal Guy. If the girl herself is worried that her muscles are turning guys off of her, Muscle Angst may ensue.

Another to keep in mind is that the guy (or girl or whomever) may be turned off not because of their strength or power, but more because of the personality attributes one would assume an Amazon would have (aggression, intimidating personality, easily prone to violence, etc.) That doesn't go on here unless her strength is directly connected to said personality.

Compare to I Was Beaten by a Girlnote Instead of simply being intimidated by a strong female, the guy actually loses a fight or competition to her.

Alex is too ripped for Raymond

Alex, after rescuing her boyfriend Raymond from a villain's muscle sabotage plot, is delighted to reconnect. However, Raymond quickly ends their relationship after being intimidated by Alex's temporary muscular physique.

Alternative Title(s): No Guy Wants An Action Girl, No Man Wants An Amazon

Alex is too ripped for Raymond

Alex, after rescuing her boyfriend Raymond from a villain's muscle sabotage plot, is delighted to reconnect. However, Raymond quickly ends their relationship after being intimidated by Alex's temporary muscular physique.