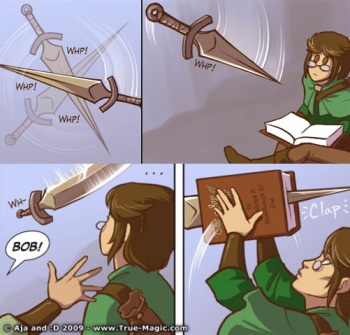 Oh no, the nerds have RISEN AGAINST US!
"Trouble rather the tiger in his lair than the sage amongst his books. For to you the Kingdoms and their armies are things mighty and enduring, but to him they are but toys of the moment, to be overturned by the flicking of a finger."
— Gordon R. Dickson, Tactics of Mistake
Advertisement:

These characters are quiet, smart, and seemingly physically unimposing, but with Hidden Depths of formidable physical and practical skills. In terms of Brains Versus Brawn, they Took A Third Option and combined the two, becoming brains dominant, if not quite Strong and Skilled.

Their physical abilities might result from applying their genius to solve physical challenges like they were math problems. Their attention to detail might also result in a Diagnosis From Dr. Badass. While some badass bookworms are surprisingly strong, others might be Weak, but Skilled, relying on flawless technique or supernatural abilities. Sometimes a bookworm can lack any special physical traits, but has access to an Impossibly Cool Weapon or enough firepower to make toe-to-toe combat, as they say, academic. A favorite weapon of the bookworm might even be what's always close at hand.

Elderly examples are often Old Masters who have spent decades contemplating philosophy and punching trees in half. Another common type is the Adventurer Archaeologist, who spends as much time studying in the University as that type does evading the poison-tipped arrows of angry natives. If the bookworms are a bit ditzy or talented but lack common-sense/etc, expect them to be Crouching Moron, Hidden Badass. If they prefer not to fight, doing so only when they must, then they have Minored in Ass-Kicking. They are very likely to wear Specs of Awesome. In a Five-Man Band specializing in Brains, a Badass Bookworm might as well be The Big Guy.

The trope is the converse of Genius Bruiser. A Badass Bookworm looks like your standard geek, but then displays a surprising amount of physical prowess, whereas a Genius Bruiser looks big, strong, and tough, then unexpectedly shows off an intellectual side. See Muggle with a Degree in Magic if their bookworm side is what's making them impressive. May take the place of the Brain in a Brains and Brawn duo.

Note this is a different trope from the typical Secret Identity superhero like early Peter Spider-Man Parker, as no one suspects the nerd to be the superhero. See also Nerd Action Hero. Often overlaps with Dork Knight. Book Dumb is sometimes the Evil Counterpart to this trope, as they're badass but idiotic in academics. Compare Cowardly Lion.