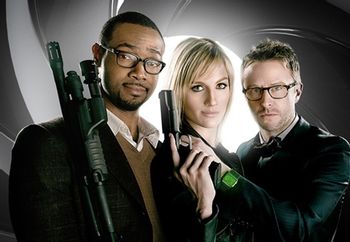 When a character is primarily a Nerd (or possibly Geek), but still manages to pull off feats of Action Heroism, then they are a Nerd Action Hero.

Sometimes this is the result of Character Development, where the character starts out as a Nerd but over time develops heroic skills. In other cases, the character is a Hidden Badass.

Sometimes a Nerd Action Hero may be paired with an Action Girl, and the aforementioned Character Development may occur as a result of their interaction.

There is an overlap with Badass Bookworm, but many of those are badass first and bookworm only as a bonus. There can also be an overlap with Science Hero, but a Nerd Action Hero tends to do more ordinary Action Hero things (shooting, fighting, jumping, etc.) when the action starts.

Compare the Super Loser, an uncool superpowered being, and Super Zeroes, who are ineffective at heroism. For characters who generally take Guile Hero or The Smart Guy roles to the point where viewers might even forget they're devastatingly effective at getting physical, they might have Minored In Ass Kicking. Can also be a Working-Class Hero if the nerdy hero is also from the lower working-class backgrounds. Compare Pop-Cultured Badass, who is often this trope.