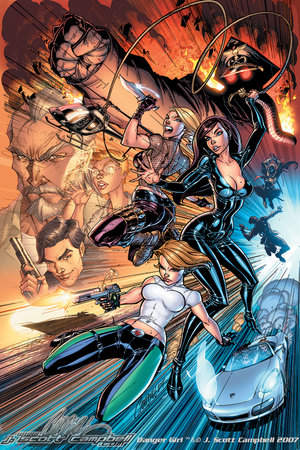 They're dangerous, they're girls...what more do you need?
Advertisement:

Infamous Fanservice comic artist J. Scott Campbell's first solo foray into the comic world, Danger Girl is notorious for many reasons, two of which are the ridiculous amount of cheesecake in the book, and the lengthy timeframe between issues, sometimes exceeding a year. The series is a satirical, yet sometimes dark, take on the espionage genre, and centered on Abigail Chase, a former treasure seeker who gets sucked into the Danger Girl team by happenstance when their paths cross during her encounters with a hostile nemesis. Abbey, as she was mostly known, pretty much played the straight woman to the rest of the quirky team.

The Danger Girls consist of Sydney Savage, reckless thrill-seeker extraordinaire from the Land Down Under, who has a thing for whips and catsuits; Natalia Kassle, the Russian assassin/resident ice queen, Silicon Valerie, the teenage techno-geek who has expertise in all things computer-related, J.C., a Canadian mechanic with an affinity for tinkering and creating mostly bizarre yet useful inventions for the team. Later on, the team is joined by Sydney's sister Sonya.

Their leader is Deuce, a former agent for Her Majesty's Secret Service who was recruited by the United Nations to lead the first all female spy team. More or less he's a caricature of Sean Connery, right down to the facial expressions and mannerisms.

The series debuted in March, 1998 and is still ongoing. The series spawned a PlayStation game and a TV Pilot Movie, though the former was the only one that actually made it past the concept stage. It has, however recently been optioned for the big screen, to be directed by Todd Lincoln and produced by the same people that worked on the Hitman film.

Not related to The '60s television series Danger Man, aside from the common espionage theme.