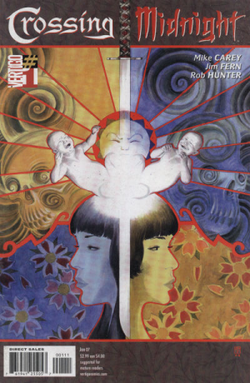 Crossing Midnight is a 2007 horror/dark fantasy comic book series by Mike Carey of DC Comics. He describes the plot as "'The Snow Queen' set in Nagasaki".

The story is told by Kai. He tells that as he was about to be born, his grandmother made his parents say a prayer for the child's health. When Kai is born, his sister Toshi unexpectedly is born with him. The twins are happy as children, and one day when they are playing, Toshi jumps out of her treehouse but discovers that she has immunity against injury. Soon after Kai discovers that he can't be injured either. Strange occurrences continue, as the twins and their friend discover magical fantasy world through the Sanno Shrine. There they meet the god of swords, and things take a turn for the worse over 3 volumes.

Mike Carey shamelessly admits it was made for his love of horror manga and films like My Beautiful Girl Mari.