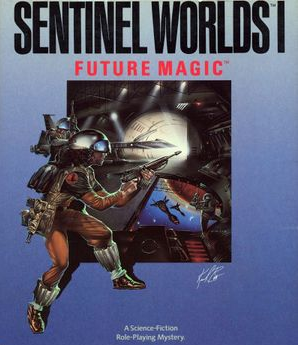 In the year 2995, the Federation of Planets' attempt to settle the Rouyn and Mistassini star systems is halted by unidentified raiders attacking the supply ships bound for these new outposts through the Caldorre system. On the behest of the Caldorran governor, eight Badass Crews, each flying an Interceptor-class starship, are sent to locate and deal with the source of the attacks. You are one of these crews, and It's Up to You to put an end to the raider menace.
Advertisement:

Sentinel Worlds I: Future Magic is a classic Space Opera Western RPG developed by one Karl Buiter and published by Electronic Arts in 1988 for DOS and Commodore 64. Originally planned as the first game in a long-running series (hence the title), poor sales smothered the idea in its crib despite good critical reception. Nonetheless, Buiter managed to produce a Spiritual Successor titled Hard Nova two years later.