Video Game / Serpent In The Staglands 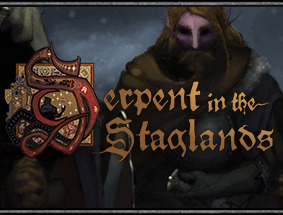 Serpent in the Staglands is a Dark Fantasy Wide-Open Sandbox Western RPG, released by Whalenought Studios

Its mechanics mirror those of the 90s Real-Time with Pause CRPGs. It's set in the world of Vol, inspired by the late bronze age in a Transylvanian landscape - with enemies ranging from Romanian mythological creatures and spirits to rogue mages and mutilated outlaws.

You take the role of Necholai, a minor god of a celestial body, who descends to the world for a moonlit festival only to find his way home blocked and immortality slipping out of his grasp. Seeking answers and aid, he takes on a mortal body and the guise of a traveling Spicer.

The game uses a classless role-playing system where you create builds via any combination of the magic, combat and aptitude skills available to use on a group of up to five characters - or you can choose to find new allies during your travels across the world.

It's heavily inspired by Darklands, both in looks and in game play elements. SitS has its older brother's difficulty (albeit mitigated by modern UI improvements), Gothic/European style and overall tone.

(where a demo can be downloaded), Steam