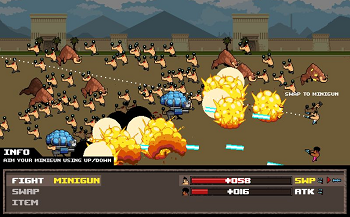 Serious Sam: The Random Encounter is a spin-off of the Serious Sam series, reimagined in the style of a dungeon-crawler RPG with retro-style graphics.

Gameplay revolves around turn-based random battles against large hordes of enemies, in which you select and aim your weapons or items and let loose until the timer runs down and the next turn starts.