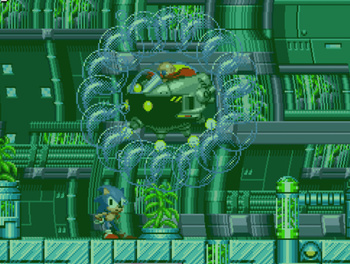 If Sonic can get a bubble shield, Eggman can too.

Water based levels in games have an odd reputation. They can be the greatest thing ever, if handled well enough, or the worst possible section(s) of a game. The Oxygen Meter can often be a big problem if your character needs to breathe. Even if your character can somehow breathe underwater or doesn't need to breathe at all (e.g. if your character is a robot) things are often a lot trickier. In these levels, assuming the game itself generally has boss fights at all, the inclusion of water in the arena can radically change a boss battle and how it plays out. Nevertheless, underwater boss battles (or generally water based battles in general) have a LOT of different possible designs, and as can be seen via the examples below, have been a standard change to the traditional Boss Battle formula since the beginning of gaming in general.

The entire arena is underwater, and the boss (as you can probably figure out) is an aquatic creature that cannot survive on land. How good or bad this is depends on how the game handles underwater controls; if the player moves too sluggishly underwater it can make the battle quite a bit tougher than it needs to be. Common types of enemies for this are usually sharks, eels, various forms of octopus, etc.

The player is on a platform or more above the water. Usually, the boss is either in the water and attacks from there, jumps out of the water at the player from under the floor or, in rare occasions, IS the water.

Your character is riding in a boat or similar vehicle on the surface of the water while the boss attacks from the actual lake/river/whatever type. Also counts any races or events against water based boss characters that involve said boat or vehicle usage on the surface.

Character in Water, Boss Above Water

Your character is in the water, the boss is above the water.

Act 3 of Tidal Plant Zone takes place underwater. Knuckles, the boss of this stage, appears in a submersible, firing torpedoes and depth charges. Sonic must attack Knuckles while dodging his projectiles and minding his oxygen supply.

Act 3 of Tidal Plant Zone takes place underwater. Knuckles, the boss of this stage, appears in a submersible, firing torpedoes and depth charges. Sonic must attack Knuckles while dodging his projectiles and minding his oxygen supply.