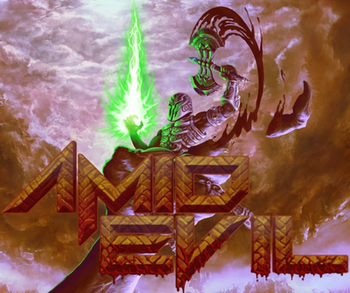 Ouch.
"Once branded a HERETIC. Now YOU have been chosen. Reclaim our sacred weapons. Take back our ancient lands. If you can stand... AMID EVIL."
-The game's description
Advertisement:

AMID EVIL is a retro-styled First-Person Shooter inspired by Heretic and Hexen, developed by Indefatigable and published by New Blood Interactive, who also published DUSK. The game, along with its first three episodes (out of seven episodes planned), was released in Steam Early Access on March 12, 2018. The game released out of Early Access along with the seventh and final episode on June 20, 2019.

The game is set almost entirely within strange arcane locations, long since abandoned by time and now ravaged with an insidious evil. Playing as a champion summoned to the Lands of the Gods to purify them from various evil influences, you do this by destroying any monster than stands in your way with a variety of strange, arcane weapons. The whole setup is an Excuse Plot to send you into varied and strange locales anyway, so don't think too hard about it.

Gameplay is fast-paced, with an array of strange weapons and fast movement speed. The game rewards successful play through the Soul System, where killing enemies in quick succession and consuming their souls can send you into a Super Mode that changes the properties of many of the weapons and makes them much stronger for a brief amount of time.

AMID EVIL received a free Downloadable Content pack in November 2019 called Ancient Alphas, consisting of five early alpha builds of the game. A prequel expansion, The Black Labyrinth, was announced on September 6, 2020.