Film / Creature from the Black Lagoon 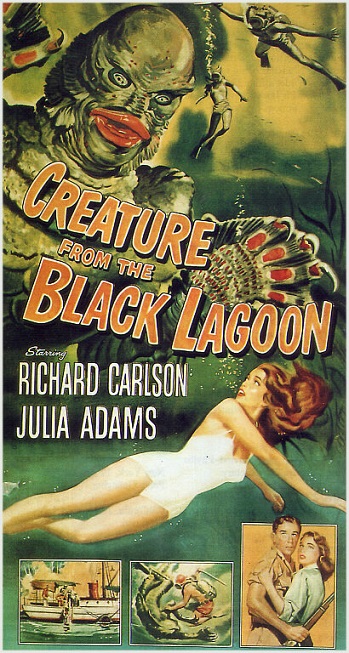 Creature From the Black Lagoon is a Universal Horror film from 1954. In the heart of the Brazilian Jungle, a scientist named Carl Maia finds a unique fossil which suggests an amphibious, transitional creature. After showing it to his colleagues at the Brazilian Marine Institute, an expedition is organized to go find the rest of the fossil. Little do they know that a live specimen of the creature, the Gill Man (or "Devonian Man") lives in the waters, who's highly territorial, lonely and intelligent, and has no intention of letting any of them leave alive.

Notable for its beautiful underwater shots (the 3-D version of the movie is breathtaking), artful full-body submersible costuming for Gill Man, location filming (in Wakulla Springs, Florida rather than Brazil, but still good) and the quick, graceful swimming of Gill Man—Ricou Browning, who played him underwater, was an Olympic Swimmer. Of course, above water he's a slow, waddling horror, but has titanic strength and jaguar-sharp claws to make up for it. Also notable for being very suspenseful and restrained compared to other B Movies, only showing Gill Man's hand and silhouette at first, and teasing the audience with having him stalk the female lead underwater almost shyly.

Had two lackluster sequels, Revenge of the Creature (1955), which was featured on an episode of Mystery Science Theater 3000 and is best known as the first appearance of Clint Eastwood, and The Creature Walks Among Us (1956). Guillermo del Toro wanted to do a remake but Universal refused, and most of his ideas went into the Oscar-winning The Shape of Water (2017).

There's also a musical based on it, as well as a pinball machine.

Not to be confused with the manga and anime Black Lagoon.

It is one of many films included in the "Universal Horror" canon (Incidentally, Ricou Browning is probably the only person to play one of the Universal monsters who's still alive).