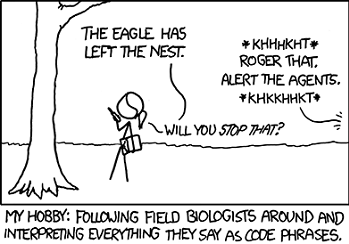 The special sound effect that makes any conversation over Comm Links sound immediately military. A transmission usually starts off with a recognizable click, then follows the actual text, along with audible white noise in the background, then ends with another click. Both sides cannot speak at the same time (also known as half-duplex operation.)

Goes very well with Danger Deadpan voice, Military Alphabet, Reporting Names, Radio Voice, and Attack Pattern Alpha. However, it doesn't always have to indicate military: Voice with an Internet Connection often sports this sound effect, too, simply for the Rule of Cool.

Amping up the static is a typical way of having a message get Lost in Transmission. If it's done on purpose, see Fake Static.

, which for the most part are used by the military, police and emergency forces. The distortion is the reason the Military Alphabet was invented. The click at the start and end is the empty carrier wave

while the person is not talking but has the transmit button depressed.