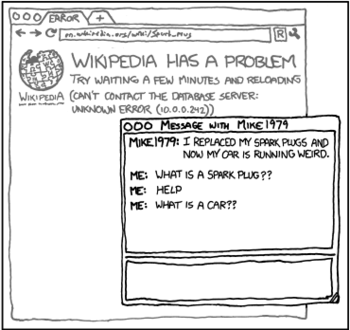 "When Wikipedia has a server outage, my apparent IQ drops by about 30 points."
Steven: You don't know about rain?
Peridot: I don't know anything without my screens.
— Steven Universe, "When It Rains"
Advertisement:

Because of this, sometimes the cell phones are more useful than us, almost to the point of not even needing us to function. In that case, some would be completely helpless without our cell-phones or our tablets or our fancy-pants PCs and Macintoshes. They can't spell correctly, they can't adapt to their surrounding environment, they can't eat anything without submitting pictures of their food onto Twitter and Facebook. They probably wouldn't even know how to turn a page after using Kindle for so long. There is a reason why "Nomophobia" (fear of being without a mobile phone) is considered an official term in the psychological community these days. Safe to say, modern conveniences can be considered a necessity for most these days.

A staple of every Phoneaholic Teenager.

"OUR GENERATION IS F*CKED"

Anthony wakes up in a world were modern convenience has dialed back 20 years. Safe to say, humanity is doomed.

"OUR GENERATION IS F*CKED"

Anthony wakes up in a world were modern convenience has dialed back 20 years. Safe to say, humanity is doomed.