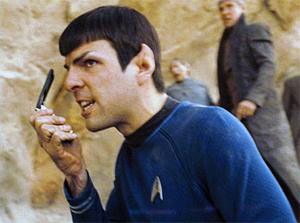 Can you hear me now?
"Battles so action-packed you won’t even ask yourself how are they all talking to each other without ear pieces."
— Honest Trailers for The Avengers (2012)
Advertisement:

Lovely little ultra-portable pieces of Applied Phlebotinum that keep the cast in constant communication across vast distances, usually without any sort of lag or static, excepting outside interference. How they work is rarely explained — they just do. They are standard equipment for any starship or superhero team. Frequently, they can patch into any other communication network with ease. They usually don't have any visible means of selecting who to talk to, but somehow this is never a problem.

Sometimes cell-phone-like (and indeed, in works set in the present, cell phones usually fill this role), sometimes small enough to be worn on the shirt or in the ear. In older fiction, they were originally inspired by the walkie-talkie, or handheld radio transceiver, which (although a rather different thing) was itself the predecessor to the modern cell phone in many ways.

Basically, just a plot device to ensure members of the cast can stay in touch over long distances. If these distances are astronomically long and communication remains instantaneous, you've got a Subspace Ansible.

The good twin of Reinventing the Telephone.