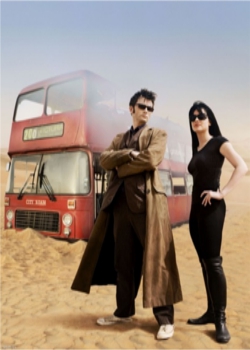 From this picture, guess where the "dead" in the title comes from. No, really. Guess.note Hint: there is no sand in this picture.
Carmen: No, but you be careful. Because your song is ending, sir.
The Doctor: What do you mean?
Carmen: It is returning. It is returning through the dark. And then, Doctor? Oh, but then... He will knock four times.
— Carmen (giving the Doctor a prophecy so chilling you can feel the Cerebus Syndrome hit from a mile away)
Advertisement:

The one with the fly in Dubai.

A light-hearted Breather Episode with very little drama, written as a contrast to "Midnight". The 200th Doctor Who TV story (the Classic Who serials are typically counted as one story eachnote This numbering excludes the then-incomplete "Shada" and counts "The Trial of a Time Lord" as a single serial), and the very first to be shot in High Definition videonote "Spearhead from Space" is also available in high-definition, but that's more due to production difficulties that necessitated being shot entirely on film rather than standard-definition videotape, it was written by Russell T Davies and Gareth Roberts and based very loosely on Roberts' Doctor Who New Adventures novel The Highest Science; really they just took the striking image of a Tube train crashing on an alien planet and made it a bus instead.

It's Easter. The Doctor has parked the TARDIS in the Buckingham Palace gardens ("she doesn't mind") and takes a bus trip around London. He tries to make small talk with Classy Cat-Burglar Lady Christina, who's escaping from a heist and who's convinced that the Doctor's just a rambling hobo. However, their conversation is short-lived as the bus takes an impromptu ride through a wormhole, taking the Doctor, Christina and the rest of the passengers with it.

It turns out that the group have landed on San Helios, a desert-like planet with next to no life (except for some equally stranded Insectoid Aliens). The group have no way of leaving the wormhole — as the bus driver unfortunately proves — and there is a Horde of Alien Locusts on the horizon. Also, the passengers are getting suspicious of the Doctor, and he realises he's in danger of reliving some painful memories.

However, it's the Doctor's lucky day: everyone, including the local merchant aliens, ends up trusting him. And instead of trying to save the day all by himself, he just quickly gets UNIT on the phone to deal with things back on Earth. Captain Erisa Magambo is honoured to talk to the Doctor. She hands the phone to UNIT scientist Dr. Malcolm Taylor (played by Lee Evans), who squees and squees when he finally gets to talk to his hero.

The Doctor and Christina are forced to work together with the passengers to fight the hungry alien swarm that destroyed San Helios. The creatures are making a beeline for the wormhole that they created. Using Christina's Classy Cat-Burglar skills and Malcolm's brilliance, the bus is turned into a flying bus, and the Doctor saves the day. Captain Magambo thanks the Doctor, Malcolm glomps him and tells him "I LOVE YOU" about a dozen times over, and the TARDIS is neatly delivered by UNIT. Christina even manages to snog the Doctor, although he refuses to take her with him as his next companion, no matter how much she begs. He's lost too many friends recently. He does, however, sneakily unlock her handcuffs when she's arrested about five seconds later, and she climbs into the bus and flies off.

Unfortunately, this story just won't allow the Tenth Doctor to catch a well-deserved break. After being fairly ebullient, it moves back into the realm of dramatic tension and seriousness for one moment. And in that brief pause, it serves up one hell of a Wham Line, delivered by resident psychic Carmen ... the Tenth Doctor is going to die ... very soon ...

Christina: We could have been so good together!
The Doctor: [grinning] Christina... we were!

Alternative Title(s): Doctor Who NSS 4 E 15 Planet Of The Dead