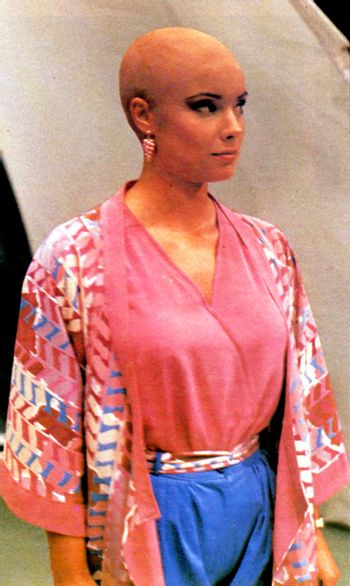 Looks like Peri's Ilia auditions are going well. It's a pity her outfit isn't as colourful as the Doctor's coat.
"Today, prudence shall be our watchword. Tomorrow, I SHALL SOAK THE LAND IN BLOOD!"
—King Yrcarnos, played by BRIAN BLESSED at his finest.

The one with BRIAN BLESSED.

The trial continues, and the Valeyard decides to bring out another piece of evidence against the Doctor: his antics on the planet of Thoros Beta.

The footage shown to go along with the trial has the Doctor and Peri landing on the aforementioned Thoros Beta, a planet beach with green sky, blue rocks and a pink ocean. They meander around the beach before going into a cave - and are quickly captured by natives of the planet. Among those aliens is Sil, whom the Doctor suspects is behind the problems of this planet as well. As it turns out, this is Sil's homeworld, the planet of his species: the Mentors. The Doctor and Peri are taken to a Doctor Crozier and his experiments — one of them being the ever-lovable BRI... King Yrcanos. Before the Doctor can object, a lie detector is slapped on his head and the Mentors begin to probe his mind. Before it can do much, however, Yrcanos blows up the machine, breaking free and taking the Doctor and Peri with him. Yrcanos plans to go steal weaponry and blow up the Mentors, but the Doctor then whacks the king on the head and turns Yrcanos and Peri over to the Mentors.

As it turns out, the Mentors are being evolved into higher beings by Doctor Crosier — and the leader Kiv now needs a new body before his brain essentially explodes. Trying to avoid himself becoming a target of that transplant, the Doctor interrogates Peri and accuses her of being against the Mentors repeatedly. Meanwhile, the Doctor is denying that this happened at all during the trial — and that he's being manipulated by someone who's messing with the Matrix (again, not that one). Finally, Yrcanos escapes with Peri and both join the resistance against the Mentors — and plan a massive attack against the Mentors as well, but are stunned and captured. Sil and Crozier decide to use Peri as a more suitable body for Kiv's brain, despite the Doctor's objections. As the operation is being prepared, the Doctor sneaks away and frees Yrcanos, urging him on for Peri's safety.

Peri is strapped down and gagged as the operation is prepared. As the Doctor and Yrcanos run to go save her, the Time Lords intervene and rip the Doctor out of time... and then purposely delay Yrcanos' strike force from actually freeing Peri until after the experiment is over with, directly playing a role in her death. As you can guess, the Doctor (finally remembering the events of this story, piece by piece) is not pleased with this at all.

Time slowly resumes its normal course and all that's left of Peri is Kiv. Yrcanos, having fallen for her over the course of the story, is devastated and blows everything up — whatever remains of Peri included. The Doctor, watching this from the courtroom, is shocked into silence. The Inquisitor and the Valeyard tell him that it was necessary to end Peri's life to prevent the disastrous consequences of Crozier's experiment, and the Valeyard further claims that Peri's death is ultimately the Doctor's fault as he abandoned her in the first place. But rather than numbly accept the accusations of the Valeyard, however, the Doctor angrily insists that there is something extremely fishy about this whole trial and that he was removed from time for other, more sinister reasons. He, being exceptionally displeased at Peri's death, vows to get to the bottom of all this, and that he will somehow avenge the loss of Peri.

This serial is notable for featuring venerated actor BRIAN BLESSED in a major role as King Yrcanos. This serial is more notable among the fans, though, for having a companion killed off rather than given a happy ending... at least until John Nathan-Turner reversed it at the end of the season.