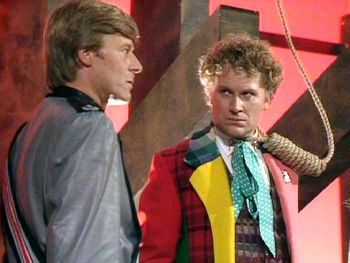 "Oh, come on Governor! My coat couldn't possibly be grounds for a hanging!" note Yes, yes it is.
Advertisement:

The one where the Doctor participates in The Hunger Games.

After the TARDIS breaks down in the middle of nowhere, the Doctor quickly decides that his life is over now and he'll be stuck in dead space for the rest of his regenerations. Peri convinces him to actually read the TARDIS manual for a change, which tells him that he could get the ship working again using some Unobtanium from the nearby Crapsack World of Varos. They land right in the middle of an execution. Timing is everything!

Being executed is Jondar the Rebel, who was trying to lead a fight against Varosian society. The government is something like mob rule crossed with Bread and Circuses — everyone's television is also a voting device. Since there's not a lot of food and entertainment left, society is hungry for any kind of distraction, and people's tastes have gotten ever more bloodthirsty. To distract the workers and discourage uprisings, public executions are carried out in a Death Course full of nastily fatal traps, the video footage of which is then sold to anyone willing to buy it. The current governor, who's constantly in danger of being executed through the TV voting system himself, sees no way out and has long since become accustomed to the way life on Varos works.

So the Doctor and Peri bogart with Jondar, picking up his wife, fellow rebel Areta, along the way, and make their way through the Deadly Game. They are separated, trapped, recaptured, nearly killed, etc., until finally the governor confines the Doctor and Jondar to the Gallows Room and begins to turn Peri into a bird unless the Doctor explains just why he's there.

The Governor and his guards all do a tentative Heel–Face Turn once they realise the Doctor may hold secrets of the outside world. However, they're also being extorted by a sort of fish-dwarf named Sil, a representative of the Galatron Mining Corporation. The Doctor is most annoyed that Peri is turning into a bird, even after he's revealed that the Varosians' zeiton ore is much more valuable than they'd been led to believe. Fortunately, the process is reversible. Now the group hobbles towards the exits, neatly avoiding the poisonous plants and the cannibals. In the end, the Governor is able to tell Sil where to stick his outrageous prices (as well as his invasion fleet) and announces a new golden age of prosperity, without any more entertaining Death Trap executions. The people watching TV look positively crestfallen.

"You'll forgive me if I don't join you."