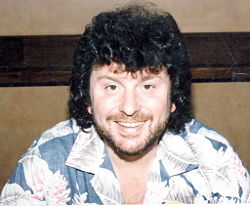 "When I first worked on the show it was in the role of floor assistant, the most junior member of the production team, basically a kind of glorified call boy."
Advertisement:

John "JNT" Nathan-Turner (born John Turner, 12 August 1947 – 1 May 2002) was the longest-running producer of Doctor Who, lasting from August 1980 to the end of the original series run in December 1989, overseeing the last season of Tom Baker and the entire tenures of Peter Davison, Colin Baker and Sylvester McCoy.

Nathan-Turner started working at The BBC as a television floor assistant, working on shows like The Pallisers, How Green Was My Valley, Angels, and All Creatures Great And Small. He got his start on Doctor Who in 1969 as part of the floor crew. The first serial he worked on was the Patrick Troughton story "The Space Pirates". He was promoted to production unit manager under Graham Williams in the late 1970s (he was in charge of the budget).

At just 33 years old, Nathan-Turner was promoted to the role of producer of Doctor Who after Williams' departure. In his first season, which was also the last season with Tom Baker as the Fourth Doctor, Nathan-Turner collaborated with former producer Barry Letts as executive producer, and Christopher H. Bidmead as the script editor. Nathan-Turner immediately made a series of drastic changes: a new opening, a new version of the theme song, and an insistence on not working with previous directors and writers of the series (with rare exceptions like Pennant Roberts, Terrance Dicks and Robert Holmes).

Nathan-Turner believed that Doctor Who had become a parody of itself in the last years of the Tom Baker era, and he wanted to re-emphasize the more sci-fi aspect of the series. He also cut down the Doctor's outfits to a Limited Wardrobe of one or two getups per incarnation, each with a distinctive question mark motif (largely for merchandizing), and brought back the Master, an iconic villain from the Third Doctor era who had only appeared once in the Fourth Doctor era. Under Nathan-Turner's command, the Master would again have more recurring appearances.

At the end of Nathan-Turner's first season, both Bidmead and Letts left their posts on the series along with Tom Baker, and Lalla Ward, who had played companion Romana. Peter Davison was hired as the Fifth Doctor, with a new trio of companions, the earthling Tegan and the aliens Adric and Nyssa. Eric Saward became the new script editor, and he stayed in the series from 1982 to 1986. Davison would be Doctor for three seasons, being replaced by Colin Baker in 1984.

In 1985, after Colin Baker's first season as the Sixth Doctor, BBC controller Michael Grade (who hated the show) imposed an eighteen-month hiatus on the series. The series returned in 1986 with a completely rewritten twenty-third season and a reduced number of episodes per season. At that point, Eric Saward, who had a bad relationship with Nathan-Turner and disapproved of Colin Baker's casting, finally gave up following a spat over the proposed season finale and left the series midway through the story's production. At the end of Season 23, Colin Baker was fired by the BBC.

At that point, Nathan-Turner also wanted to leave Doctor Who, but the BBC effectively forced him to stay on the show by making clear that it would be cancelled outright if he departed and that his association with the programme had rendered him toxic within the Corporation, making it unlikely that he'd be given opportunities to produce other shows. Sylvester McCoy was hired for the lead role and Andrew Cartmel became the new script editor for the series; because Nathan-Turner shifted to a more laissez-faire approach after the ordeal with Grade and Saward, Cartmel became the main creative force of the Seventh Doctor era. Doctor Who would last another three years before it was finally unceremoniously cancelled in 1989.

In later years, Nathan-Turner co-wrote the 1993 charity special "Dimensions in Time" for the show's 30th Anniversary. He was responsible for the direction of the home-video releases of Doctor Who, and produced some of the earliest of the show's bonus features in the form of short documentaries on specific Doctors and villains. A long term drinker and smoker, this ultimately developed into full-blown alcoholism, leading to his health failing in his waning years; he died of an infection at the age of 54 in 2002, just a year before the announcement that Doctor Who had been revived.

Accusations emerged in the mid-2010s, in a book by former Blue Peter producer Richard Marson, that Downie was a serial sexual predator who used JNT's position to groom and assault young men (the age of consent for gay men in the UK was 21 at the time). According to the book, Marson himself was one of his victims, claiming that Nathan-Turner was also known to make inappropriate advances to young men and turned a blind eye to his partner's abuses.