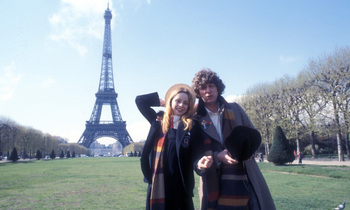 Holiday snaps from Tom Baker and Lalla Ward's little overseas awayday.
"We put a big map of the world on a wall, Douglas stuck a pin in everywhere he fancied going, I stuck a pin in where all the endangered animals were, and we made a journey out of every place that had two pins."
— Mark Carwardine, co-writer of Douglas Adams' Last Chance To See
Advertisement:

Something's a hit, the production gets either more freedom or more money, and they decide for the next entry to make up an excuse to go to a vacation spot.

This is heavily subjective, but if an actor signs onto a production that was already being shot in a vacation spot, that's a different trope (so, Bruce Campbell signing up for Congo doesn't count, even though he admitted he did it just because they needed him for a few days, and the studio would pay for him to tour the rest of the time). More than one director has joked about using location scouting as a justification for taking vacations to exotic places.

Please note cases where actors have openly stated it, and cases that are based on speculation.