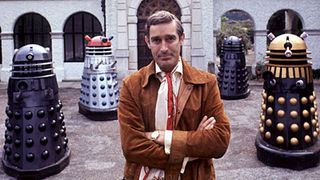 His career break came in 1962, when he was commissioned to write material for Tony Hancock – first for Hancock's unsuccessful series for Associated Television broadcast on ITV in 1963, and then his stage show. Although Nation accompanied Hancock as his chief screenwriter on tour in 1963, Hancock would regularly neglect Nation's scripts in favour of recycling his old material. Following an argument over this, Hancock fired Nation.

His most famous creation, though, was the Daleks. He came up with the concept and wrote the original Dalek story for Doctor Who, while Raymond Cusick

devised the iconic design. Contributing in a huge way to the show's longevity, Nation was asked to write several other stories over the years (with his writing contributions spanning from the show's first season in 1963 to "Destiny of the Daleks", airing in 1979 to open Season 17) , all but two featuring the Daleks.

Because of how character rights worked in BBC scriptwriters' contracts at the time, Nation maintained ownership of the Daleks himself, which he parlayed into a very successful run of annuals and comics during the "Dalekmania" of the Sixties. In later years, he barred The BBC from publishing books about the Daleks that didn't have his story approval- the writer John Peel (not the DJ) was the only writer he allowed to novelise the Sixties Dalek serials (including the two actually written by David Whitaker), and the Virgin New Adventures never did a Dalek novel at all (though they made some cameos). Even after his death, his estate maintains a tight hold on the Daleks and nearly scuttled the eponymous Dalek episode of the revived series. The frequent claim that the Nation estate mandate the Daleks are obliged to appear at least once every year is a myth, though. The actual ownership situation is slightly complicated, because while the Nation estate owns the concept, the designer Raymond Cusick was a BBC staffer, so the Beeb owns the visual design. The two parties have a gentleman's agreement to "share custody", as it were, and neither can do anything with the Daleks without the approval of the other.

He also wrote for many other series, including Hancock's Half Hour, The Avengers (1960s), The Champions (1968), Department S, The Persuaders!, The Saint, and MacGyver.

This author provides examples of: