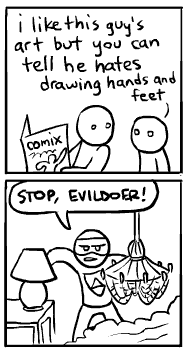 Liz Mosely: So, what exactly is it that I do as a comic character?
Greg: Well, let's see... You'll play video games, drink as much soda as you want, comment on whatever you feel like, go wherever you want, and do as you please.
Liz Mosely: Holy cow! There's absolutely no downside to this job!
Greg: Well, there is the limited hand mobility, but you'll get used to that.
— Real Life Comics, October 19, 2001

Strictly speaking, any active avoidance by a Lazy Artist of drawing a particular thing. This is usually self-admitted and, if it carries an apologetic tone, the implication is that trying to draw a difficult scene element would hamper rather than help the work. Extremely common with amateur artists. Can get extremely glaring with something the audience is expecting to see; hands, in particular, are often considered very difficult to draw.

A hand is a mess of overlapping and foreshortened digits, odd wrinkles, and tendons poking out in the strangest of places — plus, while there are only so many different positions that, say, arms or ears or eyes can assume, hands can be found in an almost infinite variety of poses holding an infinite number of things. And considering people tend to naturally focus on hands, one minor mistake can ruin an entire picture. There are entire sections in art libraries and entire university courses devoted only to hands. Bare feet have a similiar problem.

Do not confuse with playing pocket billiards.