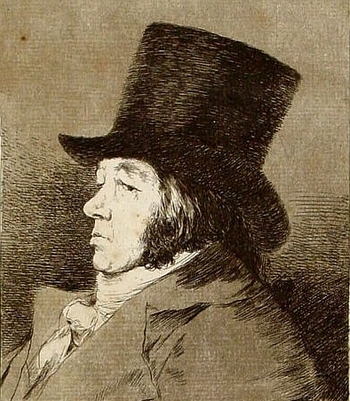 Francisco José de Goya y Lucientes (30 March 1746 – 16 April 1828) was a Spanish painter and graphic artist. He is famous for making several paintings and drawings that show the time period he lived in, Warts and All. His masterpiece The Third Of May, 1808 is one of the most iconic anti-war statements in art, along with his gruesome series of drawings, Los Desastres De La Guerra (The Disasters Of War), which depicted the Napoleonic Wars that ravaged his country. Around his 40th birthday an illness rendered him deaf, which made him more withdrawn and introspective. In effect this made his art Darker and Edgier too, with lots of Nightmare Fuel scenes showing his scorn and fear of war, religious fanaticism and mental illness.

Art critic Robert Hughes made a notable documentary about him, "Goya: Crazy Like A Genius"

, which gives interesting insight into his life and art.