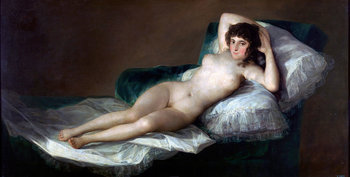 The Nude Maja (Spanish: La Maja Desnuda) is a name given to a c. 1797–1800 oil on canvas painting by the Spanish artist Francisco Goya. It portrays a nude woman reclining on a bed of pillows, and was probably commissioned by Manuel de Godoy, to hang in his private collection in a separate cabinet reserved for nude paintings. Goya created a pendant of the same woman identically posed, but clothed, known today as La maja vestida (The Clothed Maja); also in the Prado, it is usually hung next to La maja desnuda. The subject is identified as a maja based on her costume in La maja vestida.

It has been in the Museo del Prado in Madrid since 1901 where it remains. The painting itself has a twin called The Clothed Maja, a companion of the same woman in the same position and the same couch, but the model is fully clothed.

The Nude Maja provides examples of: