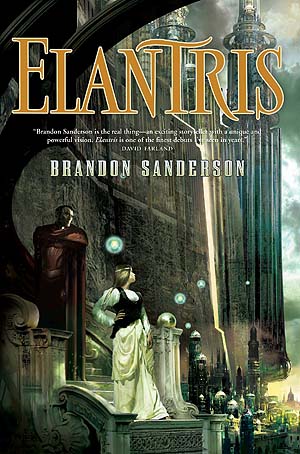 Discover where the magic began...
Advertisement:

Elantris was the city of the gods. Elantrians were people who had been magically transformed by a strange effect that strikes people at random, turning them into near-immortals able to wield powerful magic. Anyone the transformation took—beggar, peasant or nobleman—would leave their old, mundane lives behind and move to Elantris, to live in glory, wisdom, and splendor, worshiped by mere mortals for all eternity.

Eternity, as the introduction puts it, ended ten years ago. In a cataclysmic event that tore open the land, the magic suddenly failed, turning the Elantrians into grotesque zombie-like creatures stripped of their magic and their glory. The transformation still strikes at random, but now as a curse, condemned by all the religions of the world.

The story opens with Raoden, the beloved Crown Prince of Arelon, waking up to find it took him in his sleep. He's thrown into the now-ruined city of Elantris, which has transformed over the last ten years from a majestic City of the Gods into a crumbling, filth-covered insane asylum filled with cursed immortals whose bodies do not heal from even the slightest injuries. His fiance from a political marriage, Sarene, arrives from another kingdom to be told that he suddenly died during her journey, leaving her officially his widow under the terms of the contract. She immediately suspects assassination, but soon she finds far more pressing matters to worry about...

And then everything starts going wrong all at once. The kingdom of Arelon is unstable due to inept leadership, the most beloved man in the kingdom (who could have held things together) is "dead," and a high priest of the militaristic Dereth religion has just arrived in the capital city. He has three months to convert the people of Arelon, or they will all be wiped out by the Derethi in a holy war. And that's just the first couple of chapters. To say anything more would be to spoil things.

Elantris is the first published book by Brandon Sanderson, who went on to write the Mistborn books, Warbreaker, and The Stormlight Archive for his Verse, The Cosmere, which Elantris is also a part of.

Sanderson has also written The Emperor's Soul, a standalone novella set in the same world as Elantris, but in a distant Empire.

Not to be confused with the Hyundai Elantra. The Heavy Metal band Elantris is named after the novel.