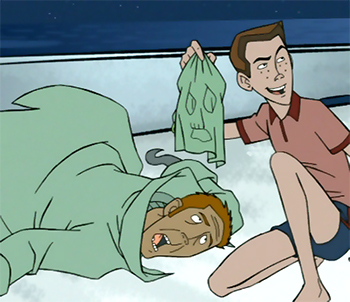 Harley Quinn: Ain'tcha gonna take his mask off and find out who he is?
The Joker: And reduce my primal enemy to a mere man? Harley my dear, I'm so disappointed in you. Where's the fun in that?
— Batman: The Brave and the Bold, "Emperor Joker"
Advertisement:

When The Hero decides to invoke the Dramatic Unmask it can be the moment they finally chose to reveal their secret identity to an ally or love interest. A gesture of trust that understandably means a lot within crimefighting circles. Their enemies will often attempt to unmask them in the hopes of making them more vulnerable by endangering not only their life but that of the hero's loved ones. Exposing a hero can also have the added benefit of having the authorities attempting to incarcerate them. After all, they are vigilantes.

In the case of the villain the big reveal may be the final part of their plan. An old face come to haunt the hero from the past or worse someone they trusted. Expect villainous characters to be especially smug if this is a complete surprise to their opponent. When the villain desires to hide behind anonymity, expect the protagonist to be the one to go about unmasking him, sometimes at any cost, so that justice is served.

Across media there is a tendency to conveniently overlook why an individual isn't unmasked when he or she's at the mercy of their foe earlier in the story. This is more commonly seen with villains, who despite having the time to put their unconscious victim into an elaborate Death Trap, don't take a moment to remove a mask. Justified in that it's done for the sake of preserving drama and most audiences will let it slide to prolong the guessing game. In some cases the rivals will even lampshade their desire not to learn the others identity as it would reduce their Arch-Enemy to being a normal person rather than their larger than life alter-ego. Although in some stories this is precisely why they want to unmask their nemesis.

Often occurs along with Luke, I Am Your Father or Samus Is a Girl. Can include Bandaged Face or Latex Perfection. Relative of Dramatic Curtain Toss, a subtrope of The Reveal. Contrast with Anti-Climactic Unmasking, where the unmasked party isn't recognized by the other characters, and Stranger Behind the Mask, where they aren't recognized by the audience. Secret Identity Apathy is the aversion. Or it might turn out to be Not a Mask. For an extra terrifying twist, there may be No Face Under the Mask!

Unmasked by Other Characters

Shane and Shana are starting to like Halloween because it's the one day of the year they can be someone else, and their original self is a lot taller.

Example of:
Costumes Change Your Size

Shane and Shana are starting to like Halloween because it's the one day of the year they can be someone else, and their original self is a lot taller.