Film / Time of the Apes 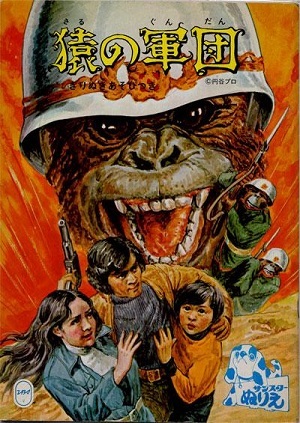 Johnny: No!...I don't wanna be killed by a monkey!note Crow: (as Johnny) I want to die by my own hand!
Advertisement:

Time of the Apes was cobbled together from bits and pieces of a 1974 Japanese TV series from Ultraman creators Tsuburaya Productions — SF Drama: Saru no Gundan (SFドラマ 猿の軍団, "Army of Apes: A Sci-Fi Drama). The series ran for 26 episodes and did not meet with much enthusiasm, not even from its "home crowd" in Japan. In 1987, enter Sandy Frank: buyer, producer, and importer of all manner of Japanese crap cinema. Sandy purchases the 26 episodes, gets rid of all but 4 or 5 of them, and splices bits and pieces from these remaining episodes into a film. Kind of like a Sandy Frankenstein monster pieced together from garage sale leftovers. This film capitalized on the Planet of the Apes series. Though obviously (sometimes painfully) Japanese, the dubbed version gives the characters English names.

The children Johnny (Jiro Sakaki in the Japanese version) (Masaaki Kaji) and Caroline (Yurika in the Japanese version) (Hiroko Saito) travel to visit the laboratory of Johnny's uncle. There they are given a tour by young female lab assistant Catherine (Kazuko Izumi in the Japanese version) (Reiko Tokunaga) and get to see the lab's cryogenic chambers. Unfortunately a severe earthquake strikes. Catherine, Caroline, and Johnny take shelter in the nearest available cryogenic chambers, which then activate when a rock falls on the on switch. They awaken in another time populated by a militaristic ape society, the outward appearance of which is similar to 20th Century Earth; the apes drive 20th century automobiles such as Buicks and Jeeps, carry M1 Carbine rifles, and wear Civil War era and 1970's clothing.

The plot then turns into a cat-and-mouse game. After escaping the apes, the protagonists are pursued into a booby-trap laden jungle area known as "Green Mountain." A human in hiding, Godo (one of the few characters to keep his name intact in the English cut) (Tetsuya Ushio), helps them escape from the apes. A hermit, Godo knows little about his own background or other humans in the world, but is well-known to the apes as a fearsome warrior.

As they struggle against the apes in a series of never-ending chases, a flying saucer appears at key moments without explanation. At one point, the beings in the saucer appear to communicate telepathically with Catherine, who reveals that the saucer belongs to another society known as the UCOMM, a group at odds with the ape society. UCOMM also seems to hold the key to their efforts to get back to the 20th Century.

For the Mystery Science Theater 3000 versions, please go to the episode recap page.

Time of the Apes has examples of: