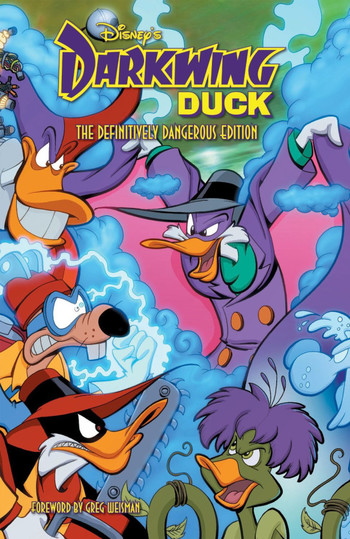 Several comic adaptations were made on this cartoon series that ran 91 episodes from September '91 to December '92. Four issues of a Darkwing Duck series were produced in late 1991, and Disney Adventures included Darkwing Duck adventures until 1996. Even Goofy was a fan.

In 2010, nearly 2 decades after Darkwing Duck went off the air, Disney revived the franchise with the announcement of a brand-new four-issue comic miniseries, later expanded to a ongoing monthly comic series, published by Boom! Kids. Unfortunately, the comic book was canceled in 2011 after 18 issues due to Disney obtaining ownership of Marvel Comics and revoking Boom's license to make comics based on Disney properties. Boom! managed to weasel the publication of a few more issues to conclude the story arc they were publishing at the time, Dangerous Currency, even after they had lost the license. Bad Idea: not only has Disney sued Boom! for this, Dangerous Currency has never been reprinted anywhere in the whole world ever since, and Disney constantly hammers that it's now "non-canon".

In February 2015, the first 16 issues of the Boom! Comics series and both stories in the single annual issue were reprinted as a trade by Joe Books Inc., rewritten by original editor Aaron Sparrow to better fit the show's tone and featuring a new epilogue. This was followed with a new series written by Sparrow and produced by Joe Books that began in May 2016 and was canceled in March 2017 after eight issues.

This page covers arcs and tropes associated with the comic.