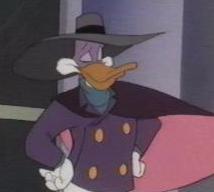 Me, demonstrating my sense of crimefighter chic.
(This page is best read in the voice of Jim Cummings or Chris Diamantopoulos .)
(Puff of blue smoke)
Advertisement:

I am the terror that flaps in the night! I am the trope page that you cannot edit! I am... Darkwwwiiiiing Duck!

I bet you want an autograph. No really, it's no trouble. Take a few more for the kids. Or maybe you want to hear some of the tales of my derring-do and cunning cleverness?

At the start, Darkwing Duck struggled solo against the sinister scoundrels who stalked the city of St. Canard. However, little did I know that that was all to change. While investigating the theft of the Waddlemeyer Ramrod, I encountered for the first time a featherbrained flyboy, Launchpad McQuack (he eventually told me he was fresh from Scrooge McDuck's mansion in Duckburg... ya might have told me that earlier, L.P.) and a spirited little girl called Gosalyn Waddlemeyer. Originally, I didn't plan to keep either of them around for longer than it took to complete the mission — Darkwing Duck dares the denizens of darkness alone! However, the mission proved more problematic than I presumed, and I was forced to interact with both for longer than I had intended... Okay, so they both grew on me, so sue me! After the defeat of the terrifying taurine, Taurus Bulba, I reunited with both of them and now we live together.

Oh, by the way, if you've heard something about there being an old TV show, a washed up actor, and some fan who was gonna star in a movie, you're thinking of some other guys. I already know from Negaduck that there's more than one me.

Now that you've heard that story, maybe you want to hear some specific samples of the circumstances of my crimefighting career? Very well... that is, since you insist.

Tropes I've left my mark on: