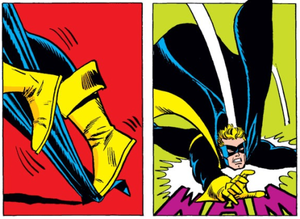 No capes!
"I will not wear long, heavy cloaks. While they certainly make a bold fashion statement, they have an annoying tendency to get caught in doors or tripped over during an escape."
— Evil Overlord List Cellblock B, Rule #214
Advertisement:

Capes: the ultimate fashion accessory. Whether they're the mark of a hero or an indicator of evil, they're always cool and badass, right?

A somewhat postmodern take on capes; that they are Cool, but Inefficient. Not only that, but they're a liability, with a nasty habit of getting tripped over, snagged on things, caught in jet turbines or grabbed by pragmatic enemies during a fight, leading to inconvenience or worse. Never don one unless you're a master of the art of Giving Them the Strip.

Often shows up during Superhero deconstructions/parodies, specifically with regards to the Superheroes Wear Capes/Badass Cape tropes. Surprisingly Realistic Outcome can come into play here. See Also: Not Wearing Tights, where the characters refuse costumes entirely, Killer Outfit, when it's the rest of your wardrobe trying to taking you out, and Pinned to the Wall.

Grievous goes for a train ride

Shaak Ti sends the droid general on an unexpected trip with a discreet application of The Force.

Grievous goes for a train ride

Shaak Ti sends the droid general on an unexpected trip with a discreet application of The Force.