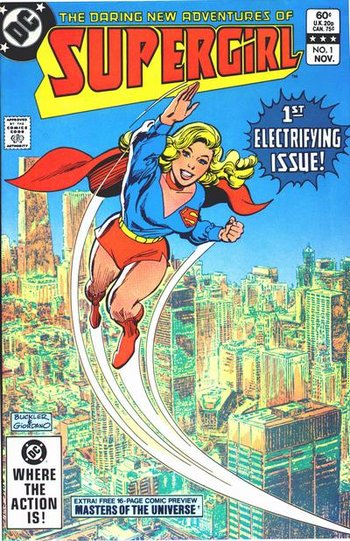 *Whew!* You've come a long way, baby!
Besides, I could do with the time to myself... to sit back and think. It's selfish, I know, but I deserve... Whoa! There you go again, Linda!
There's nothing selfish about wanting to get into yourself for a while instead of thinking about the whole blasted world! I do enough of that as Supergirl — and wasn't the whole reason for this move... to give myself space to be just plain Linda Danvers?
I've been Supergirl for such a long time, it seems. Not that I'd give that up for anything... but I feel like I've totally lost hold of the part of me that doesn't scoot around the universe in shorts and a cape! I've forgotten what it feels like to be just a person... Instead of a symbol!
— Supergirl
Advertisement:

With her career as a daytime TV star having given her some degree of financial security, and free from the pressure of being both a superhero and a well known media personality, Kara feels she finally has the grounding to stay sane and figure out who is more important: Linda Danvers -the self-assured and mature woman she has become- or Supergirl -the veteran and powerful crime-fighter hero-? However, new trials and enemies will make her new life as difficult as always before the skies turn red and she faces up to her final challenge.

The Daring Adventures of Supergirl's abrupt cancellation left several plot threads dangling. However, DC published a series called Solo in 2004, and writer Diane Schutz used the opportunity to tie up one of those loose ends. Hence, Young Love is a kind of coda for the second Supergirl series.

Supergirl: But then, you're not the same little girl of fifteen these days — except, maybe, for the pain of loss...!