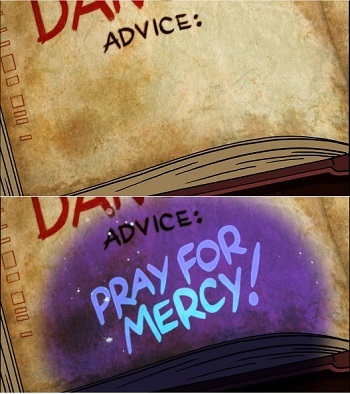 Something that looks innocuous and featureless actually has some writing on it. You aren't able to see it with the naked eye; you'll need some way to reveal it.

A simple example is writing a messsage with citrus juice. Once it dries, the print becomes invisible. One must warm the paper to reveal the words. Other times, you will need specialized equipment such as a fluoroscope or a chromatic filter to view the writing. In fantasy worlds, magic or Green Rocks are needed to make the writing visible. Possibly, the writing can only be read by a specific person, or at a specific time frame or location. Otherwise, the writing is invisible.

As with any secret message, this is done so the message can't be read by just anyone, and can easily be overlooked during a search.

May lead to Fridge Logic: If one uses an "invisible ink" to write, wouldn't the writer have a hard time writing it? (It may be handwaved by turning the text invisible after it was written, in some way.)

Truth in Television: This was a valid secret communication technique right until the 20th century, when UV lamps (a/k/a "Wood's Light", "black light") rendered it obsolete.