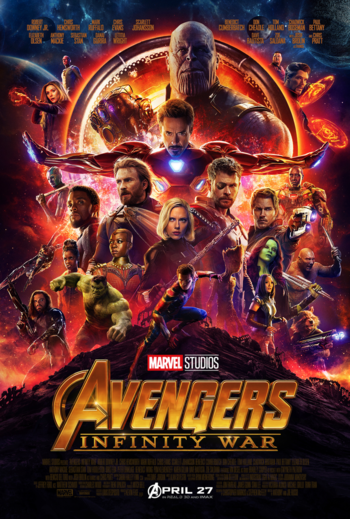 The End Begins Here! * Top to bottom, left to right: The Vision, Scarlet Witch, Nebula, The Falcon, Winter Soldier, Black Panther, Shuri, Captain America, Okoye, The Hulk, Thanos, Iron Man, Black Widow, Spider-Man, Thor, Groot, Star-Lord, Gamora, Mantis, Wong, Doctor Strange, War Machine, Drax the Destroyer, and Rocket Raccoon. An Entire Universe, Once and for All.
"I know what it's like to lose. To feel so desperately that you're right, yet to fail nonetheless. It's frightening, turns the legs to jelly. I ask you, to what end? Dread it. Run from it. Destiny arrives all the same. And now it's here. Or should I say, I am."
— Thanos
Advertisement:

Avengers: Infinity War is a 2018 superhero film and the nineteenth film entry of the Marvel Cinematic Universe, as well as the seventh installment of Phase 3 and the third Avengers film overall. It is directed by Joe & Anthony Russo, and written by Christopher Markus & Stephen McFeely — the team behind the second and third Captain America films. This team would go on to make Avengers: Endgame, which concludes the story arc started by Infinity War.

After years of planning behind the scenes, Galactic Conqueror Thanos at last comes to the forefront and begins to assemble the six Infinity Stones into the Infinity Gauntlet — an Artifact of Doom with the power to make its wearer omnipotent — in order to enact his plan to save the Universe for generations by eliminating half of all sentient life in an instant. Now the heroes of Earth and the galaxy at large must unite, before untold trillions are killed with the snap of Thanos's gold-plated fingers.

The film and its successor, Avengers: Endgame, collectively serve as the culmination of everything that has happened in the Marvel Cinematic Universe up until the end of Phase 3.

"We're in the endgame now."
Feedback