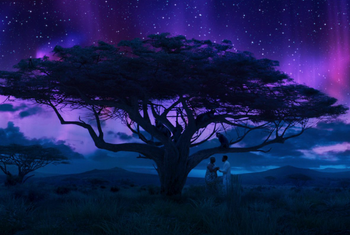 Dark Is Not Evil. It can even be beautiful.
"I do not speak literally of the absence of sun. I speak of a darkness that is home to all that have lived. We were born in darkness. We return to darkness. The warm sable of the womb. The cool pitch of the grave. It is in darkness that creation itself resides. Ideas entwining in the recess of the skull. Lovers entwining in the night. The darkness that comes is the Death of stagnation, and the birth of creativity. "
— Catarina, Master of the Dead, Path of Exile (pre-version 3.5)
Advertisement:

This trope usually manifests in the powers of The Dark Side being treated as equal compared with the powers of Light, coming with the same acknowledgement and worship that people offer to the Light.

Usually, this kind of darkness takes the form of a "pure" darkness as opposed to the "corrupted" darkness that is typically used by villains. The philosophical interpretation behind this is acknowledged that light and darkness can and must exist only simultaneously. Darkness can still be associated with aspects such as death, but expect this to be treated in a positive way, such as death being an important part of the cycle of rebirth, being natural and therefore necessary for the world. Also, a dark god may simply be doing an unpopular, but still very important job, rather than being a villain. This kind of darkness may not be nice, or comfortable, or maybe it is even outright terrifying, but it nonetheless radiates a dignity that cannot be denied and, like it or not, you know that the world would be worse off without it.

"Pure" darkness powers can often easily be distinguished from their "corrupted" counterparts. A One-Hit Kill spell by a villain using corrupt darkness will probably involve a lot of pain, mutilation, or brutality; a pure darkness spell of that kind, on the other hand, might result in something resembling a peaceful sleep or simply just dropping dead. Pure darkness powers tend to avert the more obviously negative aspects of darker powers such as Mind Rape or Torture and instead tend to be more spectacular and flashy, or involve beautiful stuff, like conjuring up the star-filled night sky, or awesome stuff like summoning a black raven or other creature associated with the night. For instance, if a hero's signature move is a combo attack where he cloaks his blade in light magic, a "pure" darkness counterpart to that move would simply involve cloaking the blade in shadow instead.

Despite this, it may still carry some of the usual problems of dark powers, such as the Noble Demon spirits empowering the Sword of Plot Advancement deciding that their user is not worthy enough to use them, or simply the usual problem of prolonged exposure to the darkness being dangerous to the mind. Note that "sacred" does not have to equal "good." More often, these characters embody a morally neutral concept or ideal. On rare occasions, villains can use The Sacred Darkness, but usually this only works when they are opposing another villain who is using the corrupted variant in an A Lighter Shade of Black situation.

It can also be interpreted as necessary and holy when it's part of a Yin-Yang Bomb. In a similar vein, the pure/corrupt interpretation can be done for Light in a Light Is Not Good scenario, such as a "corrupt" light spell that gives the enemy radiation poisoning. See also Light/Darkness Juxtaposition.

This trope is the logical conclusion of Dark Is Not Evil but it does not strictly exclude Dark Is Evil. Please note that this trope is not just Dark Is Not Evil. The usual variant of said trope is that a good person is donning dark motifs and/or using dark powers despite their villainous and problematic connotations for the sake of good. That is not really this trope. This trope is about some kind of darkness that exists in a form where you can reasonably justify its existence for the good of the world or when darkness is treated in some way as equally holy or good as Light would be treated. Generally, if your hero can make a "No More Holding Back" Speech or Rousing Speech involving the virtues of their particular brand of darkness, it qualifies.

Example of:
Dark Is Not Evil