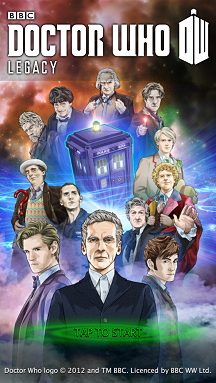 Doctor Who Legacy was a tactical Match-Three Game with Role-Playing Game elements based on Doctor Who, published for tablets, smartphones and Facebook by Tiny Rebel Games. It's part of the Doctor Who Expanded Universe.

Notable for its gorgeous art and its Continuity Porn, Doctor Who: Legacy proved that there's No Problem with Licensed Games. It's made for dorks, by dorks, and aimed to celebrate all 50+ years of the show. The game makes no division between "new" and "classic" Doctor Who, nor between the Whoniverse and the Doctor Who Expanded Universe: the game was filled to the brim with references and Continuity Nod moments, going beyond the televised canon and into the worlds of Big Finish, Titan and Doctor Who Magazine comics, novels, and so on. Although solid in plot, Legacy also thrives on Rule of Cool and never takes itself too seriously. (Playable characters, for example, include Stormageddon, Tricey the Triceratops, Bessie, and Mr. Huffle.)

The story starts with the Sontaran empire, which has gotten its hands on time travel technology and is causing a massive Time Crash in the process. The Eleventh Doctor, Madame Vastra and Jenny Flint resolve to prevent the universe from collapsing, using colourful orbs of Circular Gallifreyan. They soon stumble upon the Tenth and Seventh Doctors, and eventually encounter Doctors, companions and friends from all over time and space. Scenes and battles from throughout history get mashed up together by the Time Crash — not that the Sontarans care, because if the glorious Sontaran empire becomes the last surviving stable point in time, it means they'll have conquered the universe. And there are others, much more cunning than the Sontarans, who would use the shredded Web of Time for their own purposes...

The game had an active fan community, and the creators frequently asked the fans for input and suggestions, which were directly reflected in updates.

The main story added significant new characters as they appeared in the series and eventually totaled four "chapters", but the game as a whole remained a work-in-progress to its end. A selection of special level sets were available, such as ultra-difficult "Expert" rounds that drop extra-powerful characters upon completion and sets inspired by Series 8 and 9 onward that were released level-by-level as their respective seasons unfolded. Gamers who spent a little bit of money were also allowed access to beta levels, additional storylines, fan-created content, and a Lighter and Softer set of levels for kids with cartoony art — all of which also dropped additional, unique characters and costumes.

The game was shut down on February 2019 as Tiny Rebel decided not to renew the Doctor Who license for this specific game. In its place, a successor to this game from the same developers, Doctor Who: Infinity, arrived in 2018.

Doctor Who: Legacy provides examples of the following tropes: