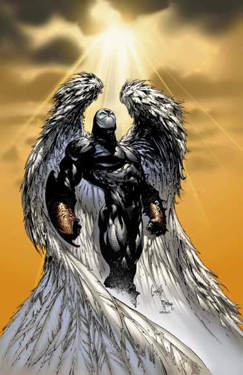 When hell's bells ring, a demonspawn gets its wings.
"No day goes by where I am not tempted to return to my inborn nature. Zin krif haalvut se suleyk.Translation Approximately: "Honor fights the touch of power." What is better? To be born good, or to overcome your evil nature through great effort?"
— Paarthurnax, The Elder Scrolls V: Skyrim
Advertisement:

Being Evil Sucks, though not all baddies realize this or care. What really sucks about it is that those that want to give Good Feels Good a try often find it near impossible to fully pull a Heel–Face Turn. This isn't for lack of trying, but because they're a demon, vampire, or other Always Chaotic Evil critter whose very body is Made of Evil. Kinda hard to walk into a temple and pray for forgiveness when you spontaneously combust by crossing the threshold. This is a big reason why humans turned to monsters who held onto their humanity will angst at their abysmal fate.

So, what to do? Fall in reverse, and become an Ascended Demon!

The demon looking to ascend has a few avenues to explore. The most common are to go on a literal or metaphorical quest to Find the Cure!. If their "evil nature" is biologically based, like viral vampirism or hereditary lycanthropy, finding the recipe for an ancient cure or researching a new one is one possibility. When it's mystical, getting an artifact (usually a holy relic) is another. The metaphorical route requires they try and get a benevolent god to "reformat" them into a human or even angelic body. This often requires doing lots of good deeds or having an epiphany on the nature of good. Sometimes, just getting a soul in itself is enough to earn salvation from the Nothing After Death and a Reincarnation as a non-Always Chaotic Evil being.

There's a fair chance that by refusing their evil nature they lose or dampen all of those nifty powers, though it also likely removes several exploitable weaknesses. Of course, such a feat may well do the opposite and take the "Suck" out of Blessed with Suck, and make them a top tier angel.

Though by nature the Ascended Demon will be very rarenote (rising from evil is much harder than Slowly Slipping Into Evil, after all, see Milton's page quote on The Atoner) it's not uncommon for there to be a mentor who has done this before and is willing to sponsor them, or more tragically, failed and wants them to succeed as a redemption by proxy. If they really are the first to pull it off, an author might invert the Last of His Kind and have the Ascended Demon redeem some or all of their peers and reveal they were Good All Along. This is especially poignant if the demons were once angels who fell. Expect an Enemy Civil War to follow as demon-kind is divided between "loyalists" and "redemptionists". In fact, just check out the Fallen Angel page; it has far more examples than this one does.

It's not all rainbows and lollipops though. Aside from the fear of backsliding into evil, the Ascended Demon has made enemies of his former kind,note (which might not be much worse for them since they're Always Chaotic Evil, remember?) and likely faces the distrust of the good guys at the chance they're a Falsely Reformed Villain. On the whole, Ascended Demons are a good way to avoid/avert the The Usual Adversaries and change the situation that states Always Chaotic Evil races are completely irredeemable. It's usually used to provide An Aesop that everyone can earn forgiveness.

Not to be confused with ascending (descending?) to demonhood. Compare Grew Beyond Their Programming, when AIs or robots ascend to a more humanlike level of emotion and development. If faith redeems a human, see Heel–Faith Turn.