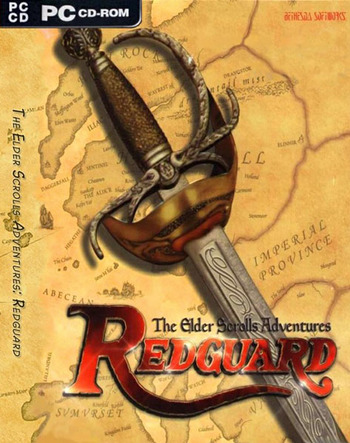 "There once was a hardy young lad of the sea... A Redguard of courage and honor was he... Sail on, my Cyrus, sail on..."
"It is late in the second era, a time of war as the Empire of Tiber Septim sweeps through the kingdoms of Tamriel in a glorious bid for conquest. Septim is opposed on all sides, but never more fiercely than by Hammerfell the ancestral home of the Redguards. The High King of Hammerfell, Thassad II resists the Imperial invasions even as he sees other kingdoms crumble until, at last, without warning and surprisingly devoid of court treachery, death takes its full measure. With its High King dead, Hammerfell is crippled plunging into a bloody civil war between the Crowns, fighting for their homeland's continued sovereignty, and the Forebears, who have finally accepted the Emperor's rule. The Crowns, led by the heir to Thassad, Prince A'Tor, are continually victorious, spilling the blood of the Forebears across Hammerfell's sands."
Advertisement:

The Elder Scrolls Adventures: Redguard is a stand-alone Gaiden Game set in The Elder Scrolls universe. Developed by Bethesda, it was released for PCnote The game itself runs in MS-DOS, but its installer requires Microsoft Windows 95. in 1998. Unlike the games in the numbered "core" series, Redguard is an Action-Adventure game with very few of the series' signature Western RPG or Wide-Open Sandbox elements.

Redguard is a prequel to the main series set roughly 400 years before the events of Arena following Tiber Septim's conquest of the Redguard homeland of Hammerfell. You play as Cyrus, a Redguard pirate who arrives on the island of Stros M'Kai in order to find his missing sister, Iszara, and subsequently finds himself in the middle of political intrigue between the Imperial forces and a Redguard resistance movement called the Restless League.

Redguard was well received by critics and fans, but due to the cost of production and being built on outdated technology, it was a financial flop. It was intended to be the first in a series of The Elder Scrolls Adventures games, with The Eye of Argonia planned as a sequel. Redguard's lack of commercial success caused Bethesda to scrap those plans and return to its roots, culminating a few years later with the company's Breakthrough Hit: The Elder Scrolls III: Morrowind.

Perhaps the most lasting impact Redguard had on the series was the inclusion of The Pocket Guide to the Empire which shipped with the game. The Pocket Guide gave one of the first comprehensive looks at the series' background lore, which would be greatly expanded on in future games.