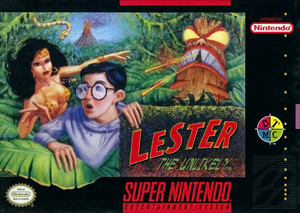 Lester the Unlikely is a 1994 Cinematic Platform Game for the SNES. In the beginning, a typical teenage boy named Lester, who is "kind of geeky" and "kind of sleepy", recently got a new issue of the Super Duper Hero Squad comic book. He was reading it while walking on a pier, until he fell asleep next to a cargo crate lying beside a cargo ship. After he and the cargo were loaded onto the ship by a crane and cruised off, the ship got hijacked by pirates who scuttled it. Lester luckily found a life jacket and swam toward the nearest island while the cargo ship sank. Lester must find his way home by exploring the island for someone or something that can help him survive.
Advertisement:

The Angry Video Game Nerd reviewed this game in Episode 96.