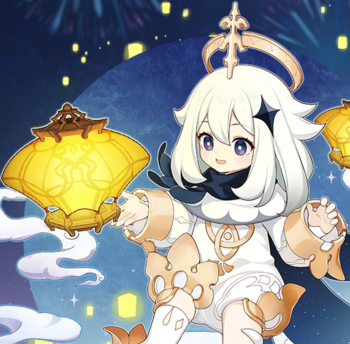 Despite what her Cool Crown-esque halo might entail, Paimon is just an average Fairy Companion and not at all royalty.
Advertisement:

Unusual Halos are halos that come with unique, strange or unusual shapes, designs, and/or colors, which helps distinguish them from the basic ring-shaped yellow/white halos commonly found in older religious legends. Certain designs of halos can be matched with characters depending on their appearances, personalities and traits.

There are good reasons for why these exist. Most of the time, it's to indicate whoever is wearing them are supernatural in origin, usually for the sake of uniqueness, divinity and awesomeness, or to show how dangerous, bizarre and creepy the entity is. The variation of halo designs can also show Rule of Symbolism, and in some cases, halos can change colors to show a character's elemental affinity, moral alignment or current emotion.

In order to qualify, the halo must fulfill one of these criteria:

2. Colors: A halo can be vividly colorful or gritty. Fallen angels or dark angels in fiction usually have purple, black or red halos (though there are also anti-heroic examples). Robots and supernatural (usually divine) creatures have neon blue, green, etc. (holographic) halos. Only having yellow (or similar) colored halo doesn't qualify. However, if the ring-shaped halo has any color but yellow/white, then it qualifies.

3. Ornaments/Decorations: The halo has a diamond, flame, ice, crystals, etc. in the hollow center of or on the halo itself.