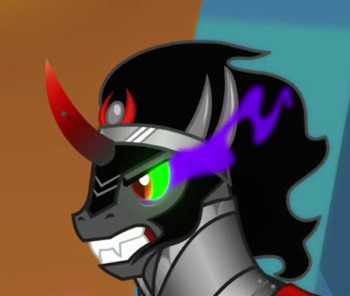 As visual shorthand for "this being is magical/powerful", the being will have streamers of magic, usually (but not always) glowing, trailing from the corner of at least one, if not both, eyes. Because this is a visual effect, it's primarily seen in CGI and hand-drawn animation, sometimes in live-action, and rarely in non-visual mediums like radio and literature. Almost always overlaps with Glowing Eyes, but it's hypothetically possible for the streamers to appear without the eyes themselves glowing. It's also hypothetically possible for the streamers to be black.

Can overlap with Fireball Eyeballs, if and only if the flames or smoke extend past the boundaries denoted by the eye sockets and face.

Compare Sparkling Stream of Tears, where someone who is moving fast while crying leaves a trail of star-like tears flowing from their eyes behind them.

Eye streamers may occur when someone with Glowing Eyes moves fast enough to leave a motion blur.

Not to be confused with Eye Beams, which shoot forward from the pupils and usually deal damage.