This is a franchise page. Please don't pothole to it unless you're referring to the franchise in general. 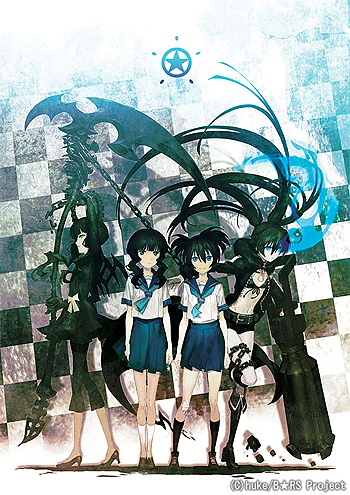 Please place media-specific tropes on their respective pages. Black★Rock Shooter might refer to:

All of them star unrelated incarnations of the eponymous character.

Not related to Blackrock Mountain.

Originally, Black★Rock Shooter was a character (she's the girl to the right with the black bikini and long twin tails) created by an artist known as huke, among plenty of other material that he uploaded to his Pixiv profile. One fateful day ryo, leader of Vocaloid synthesizer band Supercell, approached huke to create a song after having been inspired by his work, while also inviting him to join the creative team of the band. This way, the two collaborated on a music video, with huke making some small adjustments to Black★Rock Shooter's design and creating the version known today. Once uploaded

on Nico Nico Douga in 2008, and soon after on YouTube, both the song (performed by Hatsune Miku) and character became a massive success (on the Internet anyway), and in 2009 it was announced that an anime would be made based on an original story created by huke.

Aside from B★RS, huke has created plenty of other characters

◊ in that same universe, including her scythe-wielding, green eyed, horned and winged nemesis Dead Master

◊ called Black★Gold Saw (who appears at the beginning of the OVA); a cute looking girl

◊, sporting an eye patch and wielding a massive Gunblade as tall as she is, known as Black★Matagi and, finally, a bespectacled, earphone wearing and katana wielding girl

◊, called Black★Devil Girl. Oh, and in case you’re wondering the names of B★RS's weapons, the katana is "black blade" and the massive arm cannon is "★rock cannon".

that the series would make a comeback in the future.

; currently in its playable Alpha stage - they have an IRC chan on Rizon, #BlackRockUniverse. While it was officially abandoned, the authors have decided to pull it together and finish it off since it keeps coming up - stop by and chat or help out if you can.