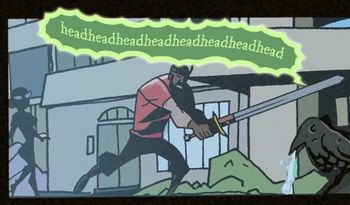 It knows what it wants.

No, not that.
As a weapon, Lilarcor has its uses, but many a warrior has eventually given it away. Banter such as "Ouch, that musta hurt", "Oh yeah! Got 'im good", and "Beware my bite for it might...might...might really hurt or something" is a constant barrage on a warrior's psyche.
— In-game description of Lilarcor, Baldur's Gate II
Advertisement:

A weapon — usually a Cool Sword — that talks. Some combination of Empathic Weapon, Evil Weapon, and Exposition Fairy may apply. It could be magical (the weapon may have its own soul) or technological (substitute soul with AI and voice output).

It might get annoying, though. If the weapon won't shut up, the wielder may feel Blessed with Suck. If the weapon can do more than just talk, see Equippable Ally.